Dead Horse Bay is a glittering beach built of trash.

On sunny days, the beach glitters—literally.

Shards of glass, large and small, cover Dead Horse Bay, with the occasional shoe, abandoned boat, and a tire or two. But this isn’t trash that has washed up on the shore. The beach is the trash. And Dead Horse Bay is not the only one like that.

The coastline of New York City today is vastly different from what Dutch settlers saw hundreds of years ago. Floyd Bennett Field on the southern tip of the Brooklyn coast is landfill. So is JFK airport in Queens on the northeast side of Jamaica Bay, and Battery Park in lower Manhattan, where the Hudson meets the East River.

Though the trash strewn along Dead Horse Bay make its former life as a landfill more obvious, a filled-in coast is the rule rather than the exception, and New York City has filled in its edges with more than one hundred years of garbage and dredged land. “We used to bury garbage everywhere,” says Professor Steven Cohen, the Executive Director of the Earth Institute at Columbia University.  “And then, eventually, we put topsoil on top of it and it became real estate.”

That was the case with Jamaica Bay, which lines the southeast coast of Brooklyn, from Marine Park to East New York, and the southern part of Queens, curving around from Howard Beach to JFK airport, and protected from the Atlantic Ocean by the Rockaways. Dead Horse Bay is a small cove on the western edge of the bay in Brooklyn, and was originally a dumping ground for early 20th century New York City garbage—a pre-plastic era, hence all the glass.

Today, jagged wooden pillars are all that remains of a dock where boats sailed up to unload their trash cargo. Much of the Jamaica Bay coastline was filled in from the 1920s through the 1950s. Other landfills popped up in the 1950s and 1960s, like the Fountain Avenue and the Pennsylvania Avenue landfills, just east of Canarsie.

After the Fountain and Pennsylvania Avenue landfills closed, the New York Times reported that the Department of Environmental Protection invested $200 million to cover them with 33,000 trees and shrubs. In fact, converting landfills into park land is the new normal. Fresh Kills, the Staten Island landfill that closed down in 2001, is scheduled to open as a massive park in 2036. The Bronx-Pelham landfill is now part of Pelham Bay Park. And Dead Horse Bay is now part of the Gateway National Recreation Area.  more > 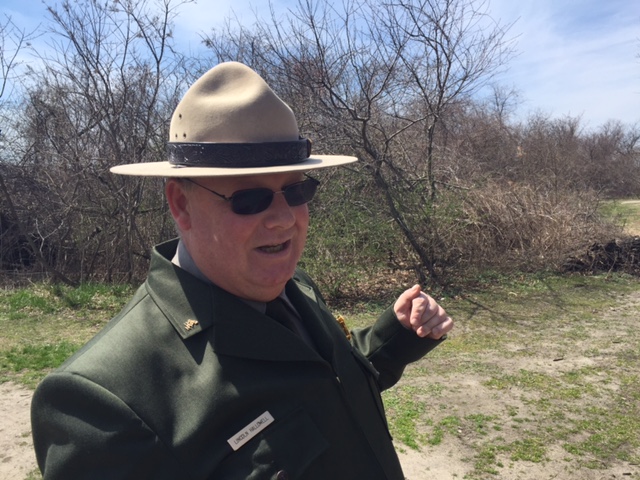 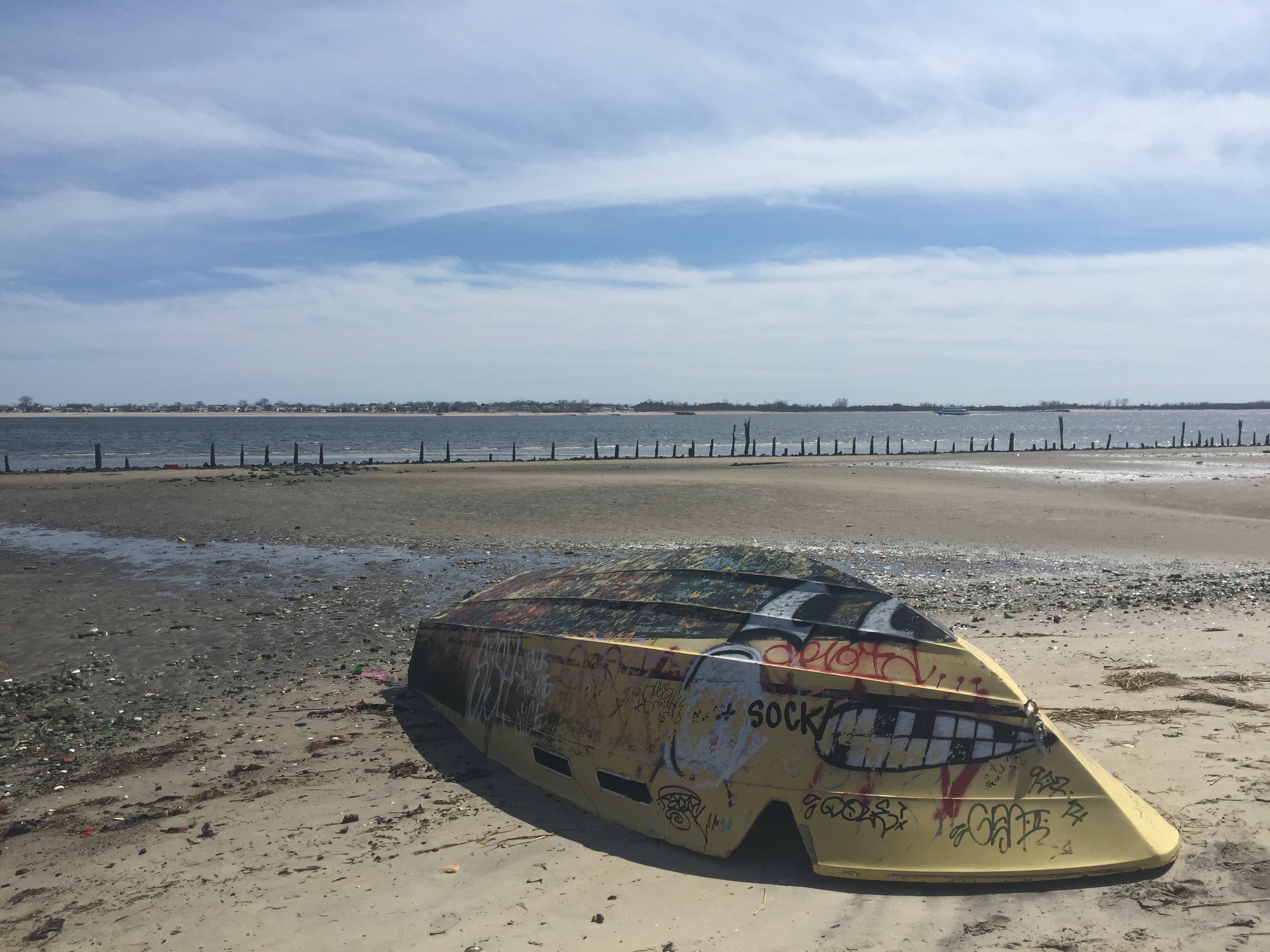 NYC uses modern incinerators that turn trash into energy for homes and businesses.

New York City’s Zero waste plan is to eliminate taking trash to landfills by 2030. Waste-to-energy facilities, where trash is burned and converted into energy through incineration, currently receive less than 15 percent of the city’s trash. The leftover ash is then sent to landfills or mono-fills, special landfills just for ash. The largest waste-to-energy company in North America is Covanta, which operates 45 facilities worldwide. New York City Lens visited a Covanta facility in Hempstead, Long Island to see the processes first hand.

The city didn't even have a sanitation department until 1880. Here's a look at how New Yorkers have dealt with garbage through history.

Trash in the Streets

New York was one of the last global cities to have an organized sanitation network. Household waste would be left to rot on the streets along with decomposing animals. The lack of hygiene meant residents had higher rates of illness and death. Early on, wealthy neighborhoods started to pay private cleaners to keep their streets tidy, but poorer areas were left to themselves.

The Department of Street Cleaning, later named the Department of Sanitation, was founded in 1881. This changed in 1895 when Colonel George Waring was appointed the Sanitation Commissioner. The position had initially been offered to Teddy Roosevelt who turned it down, thinking it an impossible task to clean New York’s streets. Although Waring only remained in his position for a few years, the structure he created largely remains in place today. In 1898 he also organized the nation’s first recycling plant.

Waring wanted the sanitation workers to be associated with hygiene and cleanliness and so he ordered them to wear all-white uniforms. He also felt the very recognizable outfits would prevent them from slipping off for a pint during work hours. Their appearance gave them a nickname, the White Wings. The workers also wore police hats which lent them an air of authority. One person would sweep the street with a broom and a horse drawn cart would follow to carry the trash away.

The same streets before and after the Department of Street cleaning began to function. 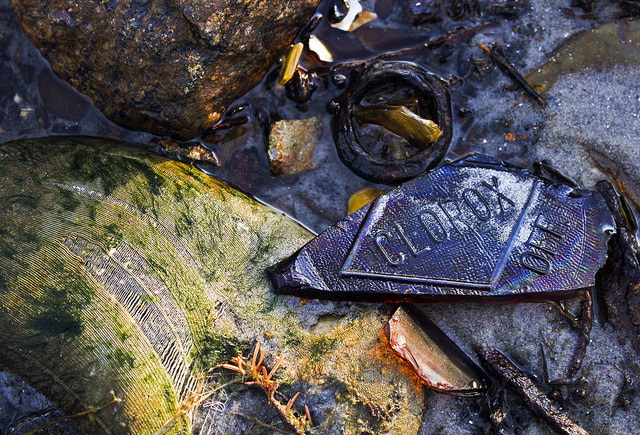 Today remnants of the past still wash up on the city’s beaches.

Tossed in the Sea

Waring made great strides for trash collection but up until 1935, New York City dumped much of its trash in the ocean. Barges carried waste out a few nautical miles and unloaded it. Trash was also sent to Barren Island, off the southeastern shore of Brooklyn.

Throughout the 20th century, New York City sent most of its waste to landfills. Fresh Kills, the world’s largest city dump, which was only intended to serve the city for 20 years, stayed open for over 50. At its height, 650 tons were brought to the site on barges each day. The landfill officially closed in March of 2001 but it briefly reopened in September to accept the rubble from 9/11. Today, it is being turned into a park. 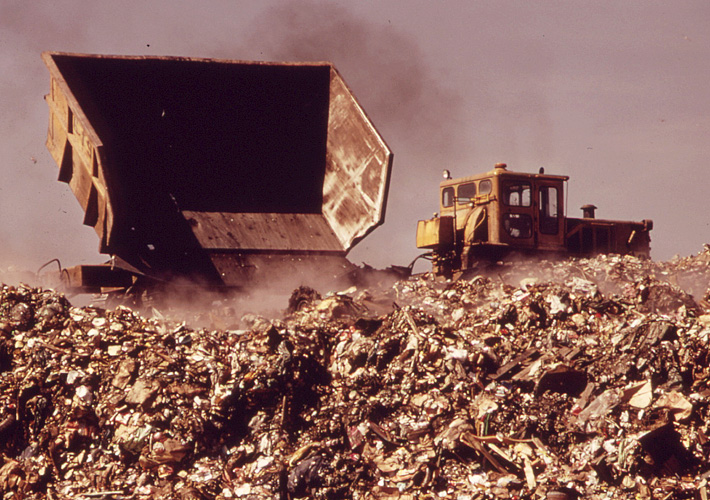 The nation’s first incinerator was built in Governor’s Island 1885. It was torn down in 1999, the last incinerator in the city to go. Burning trash was a popular way to get rid of garbage in the 20th century. In the 1960s many apartment buildings had their own incinerators which burn trash during the night. Environmental reasons made this a less popular option. 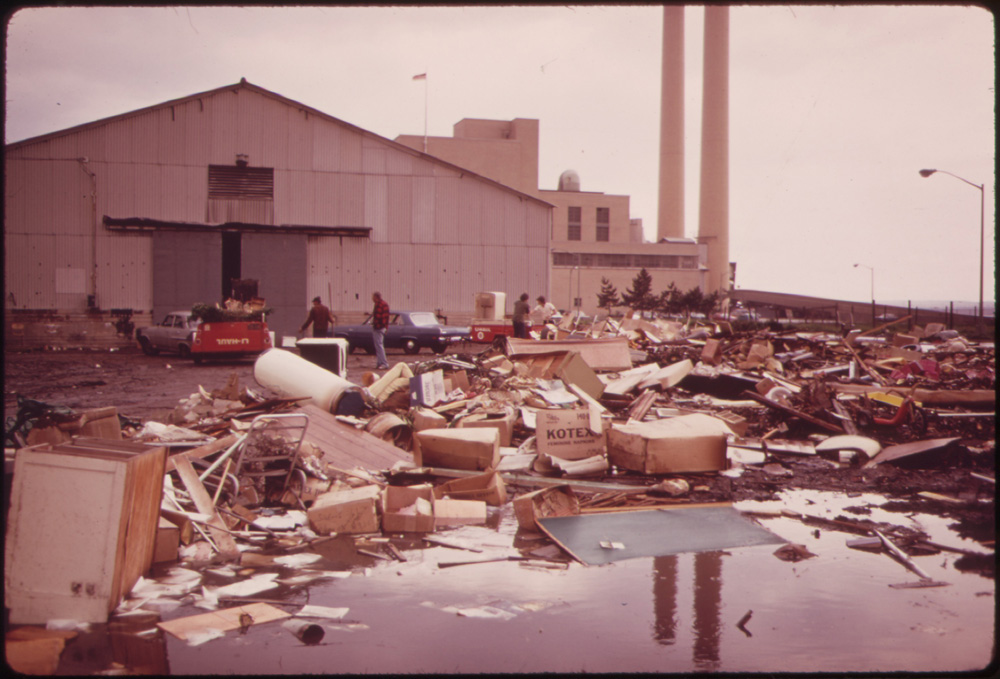 Household trash has been dumped in front of the New York City incinerator plant at Gravesend Bay.

Manhattan today sits on a lot of trash. Large parts of the island were built on landfill in order to make room for the growing population, Battery Park City, the FDR and Rikers Island, to name a few. In 1911,  some proposed filling in the East River to reclaim 50 square miles of land. — Noele Illien