Trash Without a Truck

The tram that takes residents and visitors
from Manhattan to Roosevelt Island
and back. (Marina Chetner)

The sights and sounds of garbage are everywhere in New York City. It’s impossible to walk its streets and boulevards and sidewalks without skirting piles of garbage bags. And if one day, the bags, the trucks, and the sanitation workers just up and disappeared, it wouldn’t feel natural.

That future is not as far off or as alien as some may think, however. In fact, on one island in New York, there are no signs or smells of garbage on the streets.

Roosevelt Island uses what’s called an Automated Vacuum Collection System, or AVAC, to collect its trash. It’s a network of red pneumatic tubes that snake under each residential building. As residents drop their garbage bags down trash chutes, those bags are sucked through this underground system to a station on the north side of the island, where they will be compacted, sealed into containers, and hauled away.

Is this system a glimpse of the future? “On a day-to-day basis, I don’t walk up and down the streets of Roosevelt Island saying, oh thank goodness,” said Suzanne Wolf, an associate real estate broker with the Corcoran Group, who has lived on the island for nearly 30 years and has specialized there for 15. “I kind of take it for granted, to be honest with you,” Wolf said. “All I know is that I drop my garbage bag down this chute and forget about it.” She added: “When people start to talk about their own experience, it paints such a vivid picture of the contrast between the two. But it certainly is one of the real benefits of living here.”

“All I know is that I drop my garbage bag down this chute and forget about it.”

Video of Fast Trash exhibit installation featuring pneumatic tube, Project Projects, 2010. Pneumatic tube demonstration courtesy of Lamson Airtubes, LLC, Lafayette, N.J.
When Roosevelt Island was re-designed and built in the late 1960s and ‘70s, designers and engineers borrowed from pneumatic systems that had been standard in urban design in several European countries and included it as part of their plan for a revitalized city. At the time, according to a 2010 exhibition of the system, Mayor John Lindsay is quoted as saying that the system “could one day replace garbage cans and household incinerators.”

The Roosevelt Island Operating Corporation, which operates, manages, and develops the island, manages the pneumatic system in conjunction with the New York City Department of Sanitation. The nonprofit was created in the 1980s by the state to handle operations on the island, which is nearly two miles in length and barely 800 feet in width. (Officials at the Operating Corporation did not return repeated calls or email messages from NY City Lens for comment.) 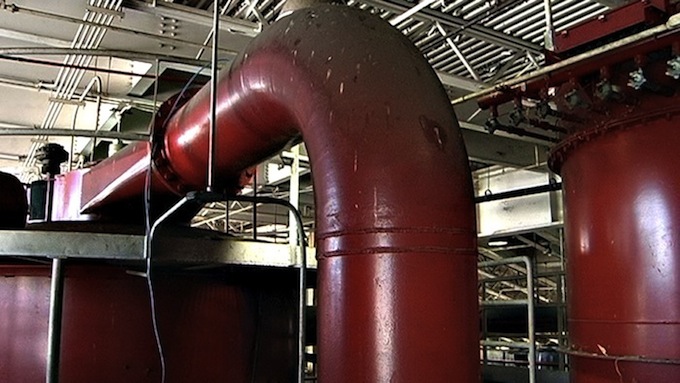 The 30-year-old waste collection system is made up of “six enormous vacuums, two cyclone separators, several miles of steel tubing, bailing wire, copious duct tape, eight NYC Dept. of Sanitation employees, and, occasionally, a six-foot tall Swedish engineer.” That’s the way the Fast Trash exhibit described the system in 2010. The system has been expanded three times to accommodate new residential buildings on the island, which house at least 14,000 people.

The tubes however collect only solid residential waste at the moment, not organics or recyclables. Business waste is also collected separately. Some experts believe this technology is one that the United States and New York City should adopt more widely, especially in light of the recent announcement by Mayor Bill de Blasio to reduce solid waste by 90 percent by 2030. Such a system requires people to do some sorting of their waste before letting it out of the house—a step toward more recycling and composting.

“Do you think that a city can overflow the streets with waste bags and/or bins on the street every day, creating sanitation problems, odor, rats, and vermin?” asked pneumatic expert Albert Mateu in an email interview. “I am totally convinced that it is the right choice for new developing areas.”

Mateu is the CEO of Green Bending SL, a Spain-based company that focuses on smart technologies for urban and rural communities. He is also a partner at Closed Loops, an infrastructure and design firm, and has been working on pneumatic systems for the past 15 years, he said, including with MariMatic, a Finnish company that is considered the most advanced company in the field.

An AVAC system “is not only a system that collects waste, it also has many advantages,” Mateu said. For example, he noted that the service is available 24 hours a day; it isn’t impacted by weather; it eliminates trash bags from the street, reduces CO2 emissions, and increases recycling. “Today, all the urban services have gone underground through pipes: water, sewer, electricity, IT,” he said. “Only waste remains on the surface.”

Despite the mayor’s plan to reduce waste and improve infrastructure, there is no mention of this technology as a viable option in talking about sustainability initiatives. It identified an organics plan, a single-stream recycling plan, and other ways to reduce waste.

Council member Antonio Reynoso of the 34th District, who is chairman of the sanitation and solid waste committee, believes pneumatic tubes should be in the city’s future. “I want that kind of technology to happen,” Reynoso said. “We introduced pneumatic tubes in projects years ago. And 10 years ago, they said, ‘That’s insane. What are you guys thinking?’ And now we see it working in Roosevelt Island and it becomes something real and tangible.” 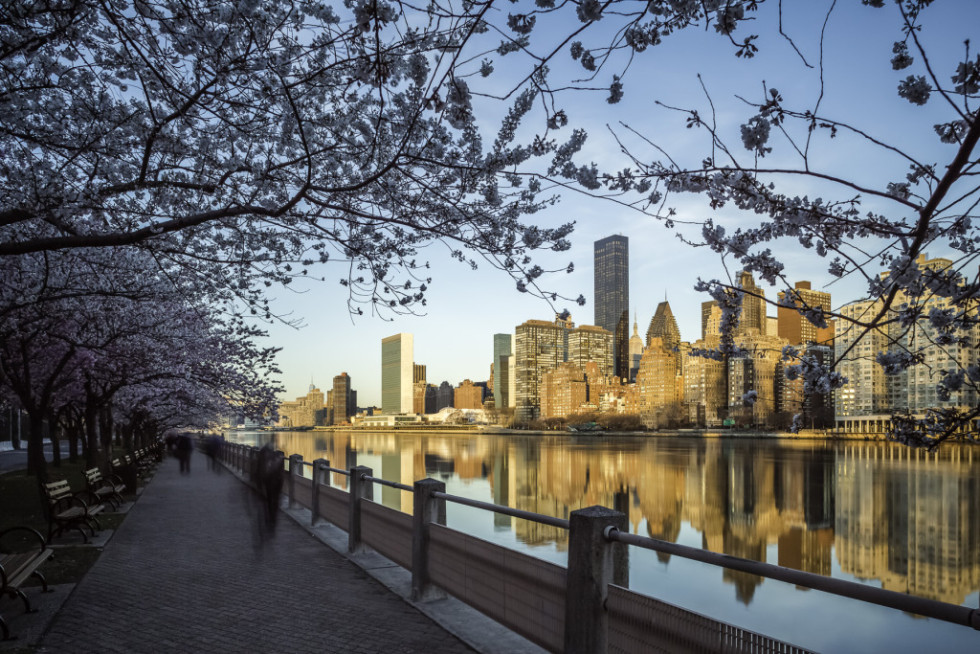 The promenade on Roosevelt Island with the Manhattan skyline in the distance. (Mabry Campbell)

Though the city itself has not identified the technology as part of its waste management infrastructure, the technology is being used in other parts of the United States and in Europe, where it is ideal for the high-density and narrow road structure common in that part of the world.

Summit Plaza, a low-income housing development in Jersey City, has employed a pneumatic system since 1972. Disney World installed one in 1969. Hudson Yards, a proposed real estate development that is being built in midtown and will include 17 million square feet of commercial and residential space, has announced that the complex will use pneumatic tubes to collect waste. Experts contend that this is the most likely way this technology will be implemented: through private investment.

“It’s very difficult for an elected official to trade for example affordable housing for pneumatic tubes,” Reynoso said. “We’re going to need to be a player in allowing for the private-public partnerships to happen so we can see those types of developments. If we do the save-as-you-throw or pay-as-you-throw plan, that would generate income to allow for the development of new technology and new processes to be able to handle our trash.” 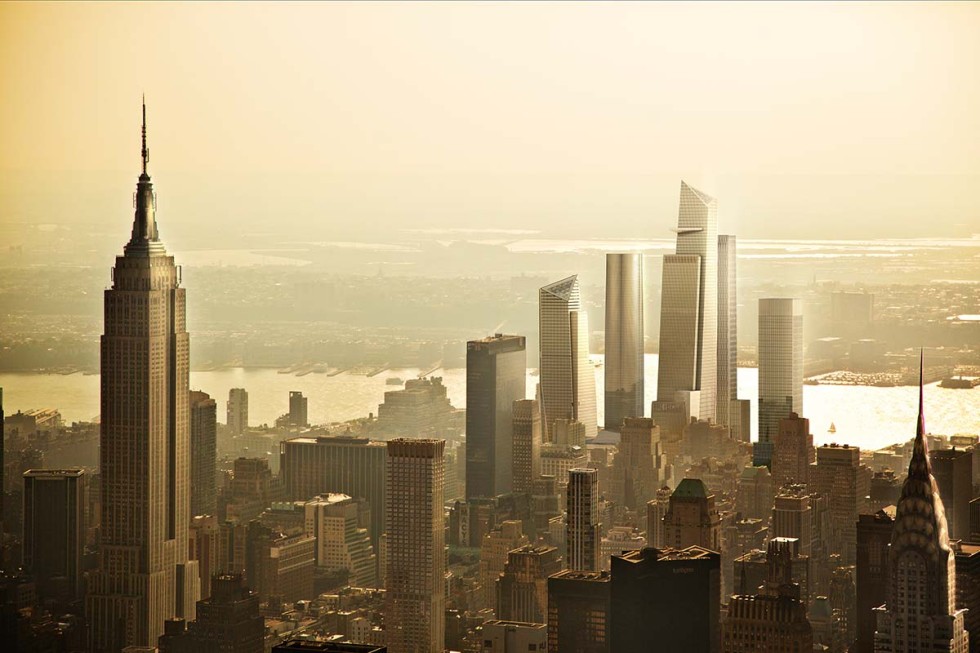 A schematic of Hudson Yards as seen from the Empire State Building. (Oxford Properties)

Tammy Gammerman, a senior research associate with New York’s Citizens Budget Commission, a nonprofit organization that studies government spending, agrees. Gammerman has authored a number of studies on waste management, including one that has called for adding a direct garbage cost to residents by way of

“The infrastructure costs are substantial when you’re talking about existing buildings, but I think it’s something that could make sense for new developments when it’s much cheaper and easier to do,” she said.

Hudson Yards will reportedly cost at least $20 billion to build in its entirety, but declined to go into specifics about its pneumatic system or the design process for the project.

“Developers and architects haven’t had to think about design around waste,” said pneumatic expert Juliette Spertus. “They’re not required to.”

Spertus, a partner at Closed Loops, has authored numerous studies and articles on AVAC systems and worked on the 2010 Fast Trash exhibit on Roosevelt Island’s system. In one study, she and her colleagues suggested that a system could be installed under the High Line, which would cost about $10 million.

“The Related Companies is an unusual example because typically a developer — there’s no requirement to limit or reduce waste and encourage recycling,” Spertus said. “Hudson Yards will be the first time that there’s a modern pneumatic system” in New York City.

She went on to agree that private companies will have to take the lead on this technology, coupled with other city departments.

“The incentive is really from city planning, Department of Transportation side, and from public health, these other areas that are not experts in waste management,” Spertus said. “For them to come in and say we want to make this change and they’re confronted by the Sanitation Department that says, wait a second, this is what we know. So you need to really spend a lot of political capital to do that.” — Solange Uwimana