Many experts praise de Blasio’s plan for its thoroughness and ambition. Others remain skeptical.

New Yorkers produce 3.6 million tons of trash a year—but if Mayor Bill de Blasio has his way, by 2030 the city will be sending “zero waste” to landfills. The details are laid out in a far-reaching strategy the mayor and his team call “One NYC.” It includes curbside recycling, more composting, and a push to eliminate the city’s reliance on landfills. The goal is admirable. Is it achievable?

NY City Lens reached out to academic experts, environmental nonprofit organizations, and city officials to assess the feasibility of de Blasio’s plan. Overwhelmingly, the group expressed praise and support for the plan’s thoroughness and ambition. But some remain skeptical.

“There’s no such thing as ‘zero waste,’” said Marian Chertow, an associate professor of industrial environmental management at Yale. “I’m compelled to say that as a professional. There’s always waste in any system, but 90 percent is a very ambitious goal.”

That said, Chertow, who has also served as the director of the Industrial Environmental Management Program at Yale for the past 24 years, felt the plan addressed environmental issues appropriately.

“I think it’s a very thoughtful proposal,” she said. “I’m usually very critical, but every time I read a paragraph, I thought, ‘Oh that’s nice, but it would be even better if they-—’ and then in the next section it would be what I thought they needed.”

“It is wonderful,” Mattfeldt-Beman said in an email. “Very ambitious and for the most part very doable. It even could create some entrepreneurial opportunities. I applaud New York’s initiative on this very important issue.”

Justin Green, the head of Build it Green! NYC, and Daniel Tainow, education director at the Lower East Side Ecology Center, two nonprofit organizations that provide recycling and composting programs to New Yorkers, are also pleased that the city is catching up to their efforts.

“It’s nice to see the government pushing the goals that we’ve been pushing for 28 years,” Tainow said.

A review of the plan by experts, however, shows that some of the mayor’s specific recommendations have a greater chance of success than others. And ultimately, for “One NYC” to achieve its goals, new legislation and policy changes will have to be made, they say.  more >

Chairman of the Sanitation and Solid Waste Committee

More than 30 percent of New Yorkers’ waste is compostable but the majority of people don’t compost. Currently, 100,000 households in all five boroughs benefit from a pilot program called NYC Organics Collection, but the mayor wants to make this available to everyone by 2018. Other compost initiatives include working with public, non-profit, and private sector organizations to develop and expand the sorting of organic waste and to launch new composting programs and drop-off sites.

A single-stream recycling program allows people to put all their recyclables in one bin. The materials are later sorted at a facility, which should make recycling easier for New Yorkers. Considering that only 42 percent of the city’s residents recycled their materials last year, this could make a big difference. But the initiative goes beyond that—de Blasio wants to create a business and industry coalition to make sure more products are made with recyclable materials and that recycling instructions are included on finished products.

Plastic bags make up 2.3 percent of the city’s waste, cost $10 million to get rid of in landfills, and often clog up drains and jam machinery, according to the OneNYC report. The mayor’s plan doesn’t specify how to mitigate the issue, just promises that the city council will work to reduce the impact of plastic bags. The city has already banned polystyrene foam food-service containers and packing peanuts since they can’t be recycled. Last year, the city collected 28,000 tons of polystyrene.

According to the OneNYC report, low-income and immigrant homes have lower rates of recycling. To mitigate the problem, the city will translate pamphlets and flyers on recycling into eight languages, increase the number of bins at NYCHA housing, and educate the community on recycling.

The mayor wants to launch 100 Zero Waste Schools within the next five years. The initiative would divert recyclable and compostable waste from the school and teach kids proper recycling habits.

Re-fashioNYC and Housing Works already collect used textiles and clothing, but under the mayor’s initiative, the city will partner with these non-profits to expand their efforts.

As of January 2015, it is illegal to dispose of electronic waste in regular trash. Instead, there are drop-off stations at more than 95 stores in the city, and a private company collects the materials and transports them to its facility in Massachusetts.

The program would restructure how the city funds trash removal and create a volume-based incentive for residents and property owners, thus rewarding those who produce less waste and increase recycling. The mayor envisions this could reduce waste by 30 percent.

The sights and sounds of garbage are everywhere in New York City.

It’s impossible to walk its streets and boulevards and sidewalks without skirting piles of garbage bags. And if one day, the bags, the trucks, and the sanitation workers just up and disappeared, it wouldn’t feel natural. That future is not as far off or as alien as some may think, however. In fact, on one island in New York, there are no signs or smells of garbage on the streets. Roosevelt Island uses what’s called an Automated Vacuum Collection System, or AVAC, to collect its trash. It’s a network of red pneumatic tubes that snake under each residential building. As residents drop their garbage bags down trash chutes, those bags are sucked through this underground system to a station on the north side of the island, where they will be compacted, sealed into containers, and hauled away.

Is this system a glimpse of the future?

“On a day-to-day basis, I don’t walk up and down the streets of Roosevelt Island saying, oh thank goodness,” said Suzanne Wolf, an associate real estate broker with the Corcoran Group, who has lived on the island for nearly 30 years and has specialized there for 15. “I kind of take it for granted, to be honest with you,” Wolf said. “All I know is that I drop my garbage bag down this chute and forget about it.”

She added: “When people start to talk about their own experience, it paints such a vivid picture of the contrast between the two. But it certainly is one of the real benefits of living here.” more >

Watch the Automated Vacuum Collection System, or AVAC, in action.

Shipping It Out of the City

The planned garbage transfer site on the Upper East Side is a point of contention with residents.

The view would have been perfect from the Langers’ 31st floor apartment window, which overlooks the Upper East Side, Randall’s Island, and the East River.

But from the south side of the window, it is impossible not to notice the construction below. “Hopefully it will take longer than the 2nd avenue subway line,” Ira Langer, 80, mused as he pointed to the skeleton frame that constitutes the East 91st St. Marine Transfer Site, which juts just off of the Franklin D. Roosevelt Drive into the East river.

Ira and his wife, Ruth Langer, both physicians, have been looking at that view for the past four years. “It won’t be too much of an eyesore; I can always look at the site,” said Ruth, 77.

The transfer site was a component of the Solid Waste Management Plan, a Bloomberg administration initiative that the City Council passed in 2006, which aimed to create an efficient recycling plan for the city as well as address the rising costs of residential waste disposal by creating more transfer stations, and placing them equitably throughout the five boroughs. When the Fresh Kills landfill in Staten Island shut down in 2000, much of the excess garbage went through transfer sites, to be shipped to other locations in New York, New Jersey, and Pennsylvania. (The overall cost of handling this trash spiked significantly, rising from $658 million in 2000 to close to $1.25 billion dollars in 2008.) Meanwhile, the estimated cost of building the East 91st St. site is listed at $190 million, up from the originally budgeted $55 million. more >

Projected cost of the station in millions

The Sanitation Department is starting a number of programs to divert recyclable material away from landfills and incineration plants. The Organics Collection is one such program, with the aim of turning such waste into compost.
The Sanitation Department established a voluntary pilot program for residential organic waste curbside collection in 2013. As part of the program, participating families in the pilot areas were given a “starter kit,” which included a brown organics bin, a small beige kitchen container to collect food scraps, compostable plastic bags, and educational material about organics recycle.

“We hope our organics collection program will not only reduce the amount of waste sent to landfills, but also create compost, a natural fertilizer,” said Kathryn Garcia, the city’s sanitation commissioner.

The program currently serves 100,000 households in all five boroughs. This May through June, it will be expanded to include around 40,000 additional households. more >

Teaching kids in the South Bronx to love trash 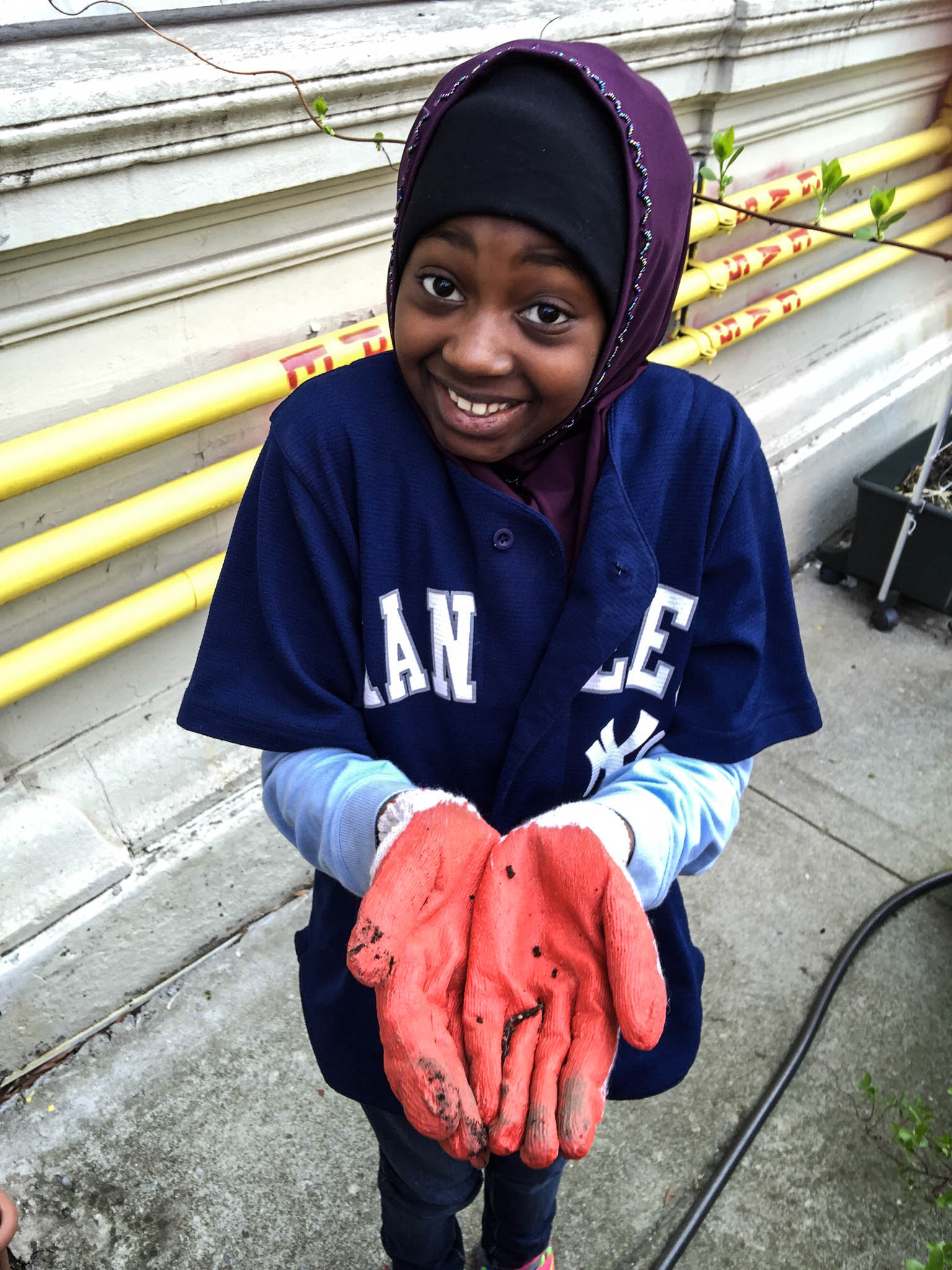 Who would have thought that in the in the heart of the South Bronx on Webster Avenue, a community garden thrives, surrounded by garbage, red brick projects and concrete playgrounds.

The garden is run by Stephen Ritz and the Green Bronx Machine. Ritz, a 30-year organic farmer and Bronx native, leads the urban agriculture initiative that helps middle school students in the community grow fruits and vegetables in fragmented and marginalized communities. Ritz conducts community composting in the Bronx. 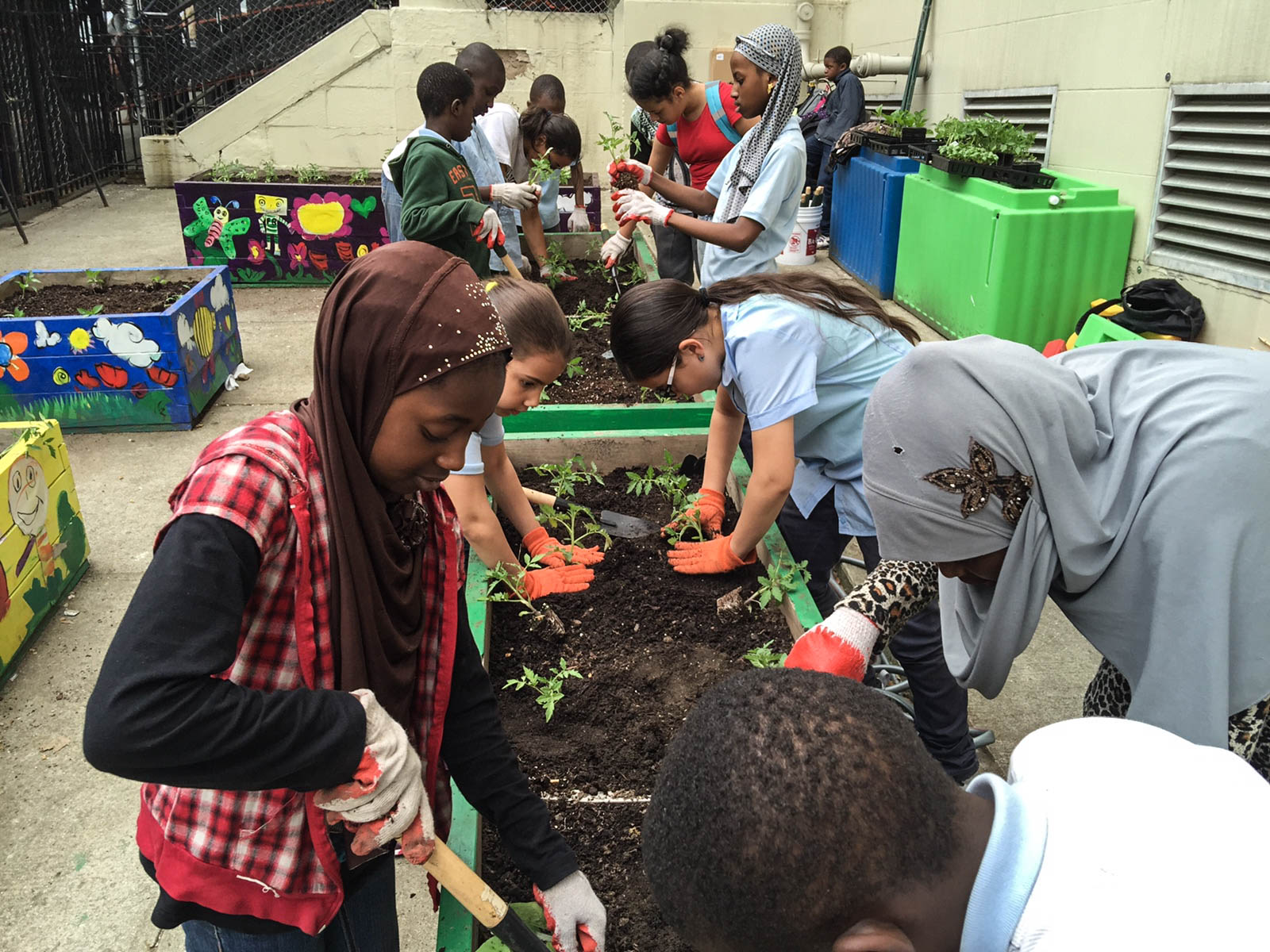 The Green Bronx Machine focuses on healthy food and composting to ensure that the fruits and vegetables are fresh. The twist: he collects trash from the community to turn into composting which is later used to help grow fresh fruits and vegetables. “We collect banana, orange peels, peers, fruits, vegetables and waste from the lunch room,” says Ritz, “In addition, we hope to collect food scraps from homes as well.” 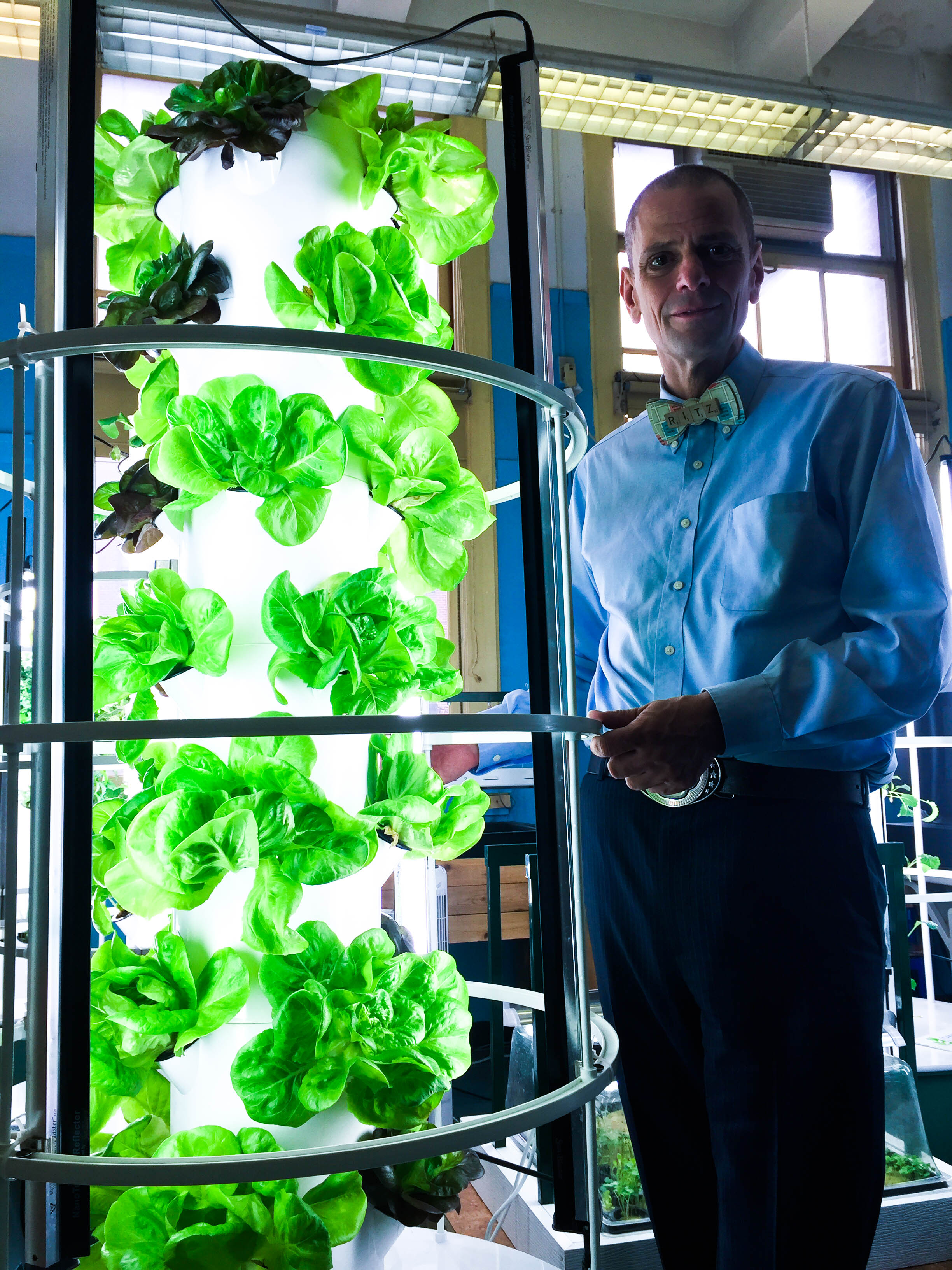 Through composting he’s been able to start an indoor community garden at the Benjamin Franklin School at Public School 55 in Clermont Village public school that host over 742 students. Composting is a natural process of recycling organic materials such as leaves, vegetable and food scraps into a rich soil amendment. The initiative is particularly important to Ritz because the South Bronx is a food desert and serves as a transfer route and host for garbage trucks. more >

Next: Picking It Up >